Our bike rental was created by cyclists for cyclists, therefore, we do not limit ourselves to renting bicycles in Sicily but we want you to experience a complete and exciting cycling adventure in Sicily. For this reason, we have decided to include the best bike tours in Sicily in all rentals. Our collection of biking trips in Sicily is called Bike Adventure Pack collection and includes the GPX tracks of the itinerary, all the main highlights and suggestions for bike hotels and restaurants. Choose your favourite bike adventure pack in Sicily, rent one of the suggested bikes and explore Sicily with the advice of local cyclists. 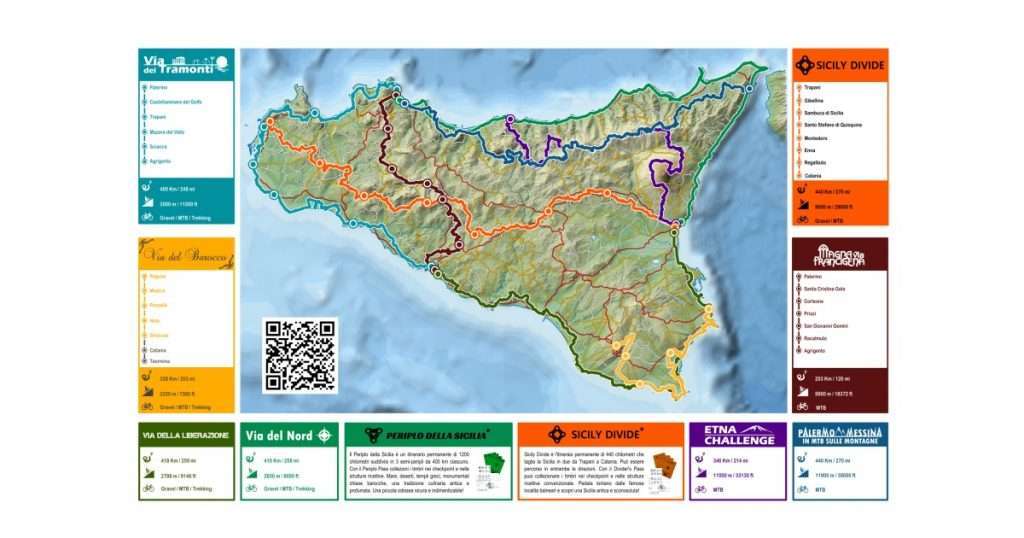 From Trapani to Catania

Previous
Next
About Sicily Divide

Sicily Divide is an adventure cycling itinerary, designed for gravel bikes and mountain bikes. It crosses all of Sicily, from one sea to another and due to its elevation characteristics it is a very hard itinerary recommended for those who want to explore the most ancient and unknown Sicily along rural and secondary roads. Throughout the itinerary it is possible to collect the stamps in the Divider’s Pass that is delivered when the bicycle is rented.

Rent a bike and explore the Sicily Divide Bike Route

From Palermo to Agrigento

Previous
Next
About the Magna Via Francigena

magna via francigena is a pilgrimage route by bike that runs from Palermo to Agrigento along the ancient Norman routes. The itinerary is very hard and requires an important athletic preparation. We recommend renting a mountin bike to travel this itinerary with peace of mind, one of the options may be to rent a pedal assisted mountain bike.

From Palermo to Agrigento

Previous
Next
About the Via dei Tramonti

The Via dei Tramonti is the cycling route from Palermo to Agrigento along the coast. With a distance of 400 km (248 miles) and a total elevation gain of 3500 meters (11500 ft), this cycling tour is perfect for your biking holidays in Sicily. Mainly along secondary roads, rural roads or local roads with little or no traffic is the safest and more relaxing route to explore the west coast of Sicily by bike. The beauty of the landscapes of this bicycle trip will distract you from the few climbs. Sea, old authentic Sicily, alfresco dining, fresh white wine and cannoli, what more can you ask for your biking vacations?

Delivery and pick-up available all over Sicily on request with an extra charge. Delivery and drop-off in Palermo with no extra charge. You can cycle the whole route to Agrigento and take the train (with bike shuttle service) from Agrigento to Palermo.

From Cefalù to Catania

Etna Bike Trail is the mountain bike route that starts from Cefalù, a beautiful seaside village on the northern coast of Sicily, and reaches Catania, crossing Mount Etna. Along its itinerary, you cross several natural parks, among which the Madonie Park, the Nebrodi Park and the Etna Park stand out. Cycling along these dirt roads is an unforgettable experience but it can be very challenging so you can decide to rent an e-MTB, then an electric mountain bike, instead of a normal mountain bike. The villages that you cross are among the most characteristic and fascinating of Sicily and have an ancient history to listen to in relaxation, after the ride, with a glass of red wine in one hand and a sandwich with sheep’s cheese and homemade ham in the other hand.

From Ragusa to Siracusa

suggested bike: all bikes
Previous
Next
About the Baroque Sicily Tour

the baroque sicily tour allows you to cycle along the secondary roads, quiet and with little traffic, of south-eastern Sicily, where everything speaks of tradition, good food and beautiful baroque buildings. The recommended type of bike is the gravel bike but this tour can be easily covered with any type of bicycle. It is not a demanding itinerary as there are few climbs, therefore, it can be traveled by all cyclists with any level of training. The cities crossed are among the most beautiful and well-known in all of Sicily: Noto, Modica, Ragusa, Syracuse. Nothing about this tour can leave you indifferent and nothing goes unnoticed. You will have to stop so many times that you may always be late.

Rent a bike in Sicily

We use cookies on our website to give you the most relevant experience by remembering your preferences and repeat visits. By clicking “Accept All”, you consent to the use of ALL the cookies. However, you may visit "Cookie Settings" to provide a controlled consent.
Cookie SettingsAccept All
Manage consent

This website uses cookies to improve your experience while you navigate through the website. Out of these, the cookies that are categorized as necessary are stored on your browser as they are essential for the working of basic functionalities of the website. We also use third-party cookies that help us analyze and understand how you use this website. These cookies will be stored in your browser only with your consent. You also have the option to opt-out of these cookies. But opting out of some of these cookies may affect your browsing experience.
Necessary Always Enabled
Necessary cookies are absolutely essential for the website to function properly. These cookies ensure basic functionalities and security features of the website, anonymously.
Functional
Functional cookies help to perform certain functionalities like sharing the content of the website on social media platforms, collect feedbacks, and other third-party features.
Performance
Performance cookies are used to understand and analyze the key performance indexes of the website which helps in delivering a better user experience for the visitors.
Analytics
Analytical cookies are used to understand how visitors interact with the website. These cookies help provide information on metrics the number of visitors, bounce rate, traffic source, etc.
Advertisement
Advertisement cookies are used to provide visitors with relevant ads and marketing campaigns. These cookies track visitors across websites and collect information to provide customized ads.
Others
Other uncategorized cookies are those that are being analyzed and have not been classified into a category as yet.
SAVE & ACCEPT